Avid knitters, general fiber enthusiasts,  Ravelers,  know of the significance of le Tour de France as it relates to the Tour de Fleece.

As an ex-"friend" of an ex-roadie, France or Fleece has a whole new meaning this year.  A roadie, as defined by Jamie Smith in The Misunderstood World of a Bike Racer, is a cyclist who road races.  Upon reading this book, I have a new appreciation and understanding of the world of cycling, from the perspective of a spectator once associated with an ex-roadie.  I was a roadie groupie.  Not exactly France, but the Catskills, 2010. 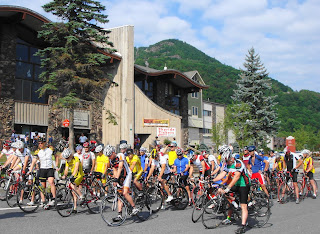 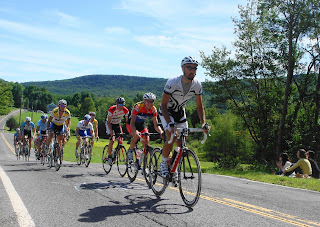 I tuned in to the Tour de France as of last year, a nightly prime-time ritual as a new-found fan of the sport.  How it relates to Fleece this year?  I've owned my spinning wheel for some months, test ran and only slightly used.  I was hoping to be inspired by the actual tour to take it out for another spin.  This is the total cumulative effort of the yarn rope I've accomplished. 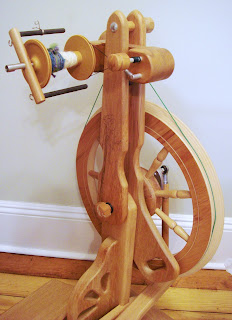 There's plenty watching of the tour, but no fleece spinning yet, only some yarn knitting.

The whole world of cycling was a foreign concept and never thought I would be watching and actually enjoy doing so.  I only learned to ride a bike as an adult, and do not ride it very well.  Yet,  I am caught up in the "draft" of the tour because of it's parallel to life.  Even if you settle into the "peloton" and move along with the mass, it requires focus and multi-tasking.  It requires team-work, trust, and there are different roles in the team, as does your support network (family and friends).  It is impressive to see cyclists tackling each stage, juggling the many tasks whether it be grabbing the musettes to feed, or doing some minor mechanical adjustments, or answering the calls of nature,  all while pedaling at the speed of a motorized vehicle.  Analogous to life, the stages can be like a roller coaster, from the climbs of the Pyrenees and the Alps to the flat stages, and everything in between.  Along the way, we have to learn to negotiate the turns, weather the storms, and may be caught in a crash (there have been some spectacular and unfortunate crashes a week into the tour)  hit pavement and get scratched up, but we get up, continue the "chase" to avoid getting "dropped";  positioning yourself in the "slipstream", prepare to "attack", and "catch" the "breakaway".  Only one can have the coveted maillot jaune (yellow jersey)  riding into Paris, but to be "field fodder" (defined in Jamie Smith's book) is okay, it means you participated.  Life, like the Tour, is cumulative of the results of each stage.  Unlike it, le Tour de Life doesn't end in three weeks, the "race" continues.
Posted by caiming at 10:07 PM 1 comment:

I will be the first to proclaim that I'm the least tech savvy person I know.  Whether it be to conveniently blame it on the absence of a computer due to viruses for some weeks (of which a friend was able to resolve in no time and I'm grateful for), or general laziness, lethargy due to hot weather...whatever the excuse, the writing hiatus is over, for now.  I only wish the same could transcend into "mental thoughts".  The only intermission from the daily trials was feeling like I had a "breakthrough moment".  It only but takes one trigger, one hesitation, one temptation, to negate progress.  I'm aware of my fragile resolve.

As for leisure time and general distractions, some enameling, some knitting , some jewelry making..
"Rainbow in Someone's Cloud- Maya Angelou" is a cloisonne enameling project started while taking classes at Liloveve.  I was able to finish firing at home with my recently acquired kiln.
Using the same enamel colors, this is a different version of the same idea. 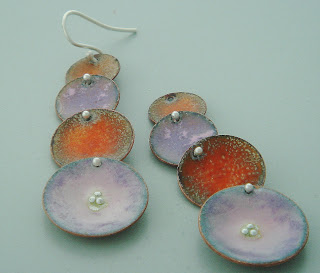 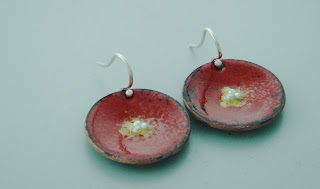 On the fiber side, Susan B. Anderson's Curly Snake was finished just in time for nephew's sixth birthday, my version is not curly.
I also had the honor of test knitting Mao by Angela Tong.  A well written pattern for a super quick knit, don't be surprised if you end up with a litter of these.

David Carradine said, "If you cannot be a poet, be the poem".  Quotes are my endorphins, they inspire, acknowledge, and assuage rough moments.  I had the idea to create Message Bubbles, some to wear, as an antidote when "sadness" creeps in. 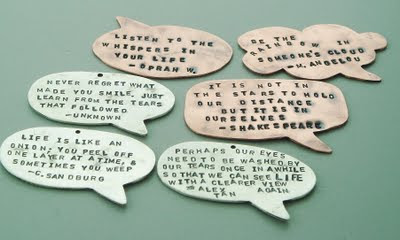 caiming
jeweler by day, dabbler of all things crafty